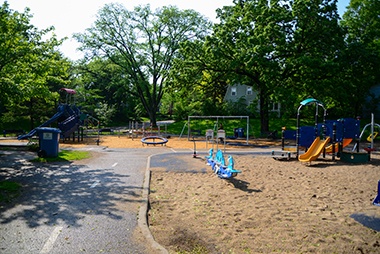 Fuller Recreation Center features 2 floors with meeting rooms, multi-purpose/community room, kitchen, and more. In 2018 the Recreation Center saw some renovations including adding air conditioning and a teen room. The park features a wading pool, basketball court, playground, grills, sledding hill, and an open green space. Community members are able to rent both indoor and outdoor spaces for celebrations and gatherings. MPRB offers programs and events throughout the year for all ages. Classes include, but are not limited to youth and adult sports, pre-school, after-school, ceramics, fitness, and more. To learn more about Fuller Park and the Minneapolis Park and Recreation Board, please visit their website, www.minneapolisparks.org. Follow them on Facebook for more up to date information.

Fuller Park was named for Margaret Fuller School built in 1896, which occupied the site until 1974. The name Fuller Park was officially adopted by the Minneapolis Park and Recreation Board on November 3, 1976. Fuller was an American writer and women’s rights activist in the mid-1800s. She was the first female book reviewer, foreign correspondent and editor of the New York Tribune. Her book, Woman in the Nineteenth Century, published in 1845, is considered the first major feminist book in the United States.